Learning a new language is rewarding at any age, but children benefit from learning another language at a very young age.  Research studies particularly support starting bilingual education at the preschool level. Very young children are quick to learn and pick up a new language. 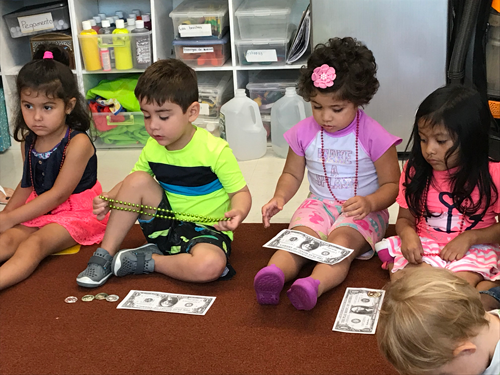 There are also many benefits children can reap when they learn a second language. A number of research studies have shown that children who learned a second language at a young age demonstrated cognitive advantages, such as increased problem-solving skills and creativity.

Higher Test Scores: Numerous reports have proven students who have studied a foreign language perform much better than their monolingual peers on many standardized tests, including all sections of the SAT. In fact, the 2007 College Bound Seniors report, issued by the College Board, which administers the SAT, shows significant benefits of studying a foreign language. The report shows that students with 4 or more years of foreign language study score on average 140 points higher (out of 800!) than students with half a year or less experience.

Better and more advanced reading skills: A study undertaken by York University in Canada suggests that bilingual children’s knowledge of a second language gives them an advantage in learning to read.

Greater confidence: Children are always discovering new things, and for children learning a language comes to them more naturally and tends to be fun as they learn in play type activities.  This accomplishment gives them the confidence they need, as well.

Gives brains a boost: Research into the effects of bilingualism on children suggests that exposure to more than one language is an excellent way of flexing those brain muscles—and building them up, too! Bilingual children in one study reported in Nature showed a significantly larger density of “grey matter” in their brains. And those who had been exposed to a second language from an early age proved to have the most grey matter of all. Grey matter is responsible for processing information, including memory, speech and sensory perception.

Natural-sounding, native-like accent: Children are always mimicking what they hear.  They are uniquely attuned to slight differences in tone and sound. Their sensitive ears help them pick up on and duplicate the tricky sounds adults and even adolescents often stumble over.  By starting early, your children can speak smoothly and confidently.

Greater opportunities for college and careers: Colleges now place an increasingly high value on knowledge of more than one language. As the admissions process becomes more competitive across the board, knowing a second or a third language adds a new dimension to an applicant’s resume.

Bigger view of the world: Traveling abroad is an experience which can benefit anyone, but being able to travel and know the language of the place you are visiting gives you confidence to experience different cultures.

Greater grasp of one’s first language—including a bigger, richer vocabulary: Most of the time we use our first language with little thought to grammatical rules. By being able to compare the two, we learn more than we ever would as a monolingual. Children use what they learn in one language to reinforce concepts and terms they’ve learned in the other.

Building and keeping cultural connections: Some of us are lucky enough to have a relative who still speaks the foreign language from his or her nationality. Being able to communicate with elder relatives helps them to learn more about their nationality, family history and traditions.

An all-family activity: Starting this process early with your child or children provides your family with an activity and an experience it can return to and grow with over the years. Your child and your family will benefit—in these ways and others—from learning a second language. And the benefits of learning a foreign language last for many years to come.

A Lifetime of Benefits of Learning a Second Language

It is clear that second language study offers many advantages for children in terms of improved communicative ability, cognitive development, and cultural awareness. It’s never too soon to start your child on the path of second language acquisition, so start today!